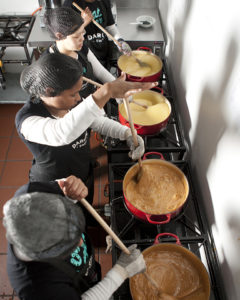 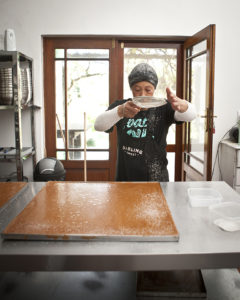 WHERE IT ALL STARTED

All of us have fond childhood memories of toffees and remember Sharp’s Toffee, Wilson’s Toffee, Sunrise Toffee to name but a few – but what is toffee and how old is this confectionery?

The process of making toffee requires the boiling of ingredients until the mix is stiff enough to be pulled into a shape which holds and has a glossy surface. The resulting mixture will typically be poured into a shallow tray and allowed to cool to form a sheet. Different mixes, processes, and most importantly, temperatures, will result in different textures and hardnesses, from soft and often sticky to a hard, brittle material. A brown colour and smoky taste is imparted to the toffee by the caramelization of the sugars called the Maillard Reaction.

The origin of the word is debatable – The Oxford English Dictionary dates the first publication of the word to 1825 and identifies it as a variation of taffy (1817), both of which are first recorded as English dialectical words. Some believe the word is derived from the word “tafia”, a West Indian rum, since cheap rum was once used to flavour candies. The food writer Harold McGee points to the native Creole language wherein toffee indicates a mixture of molasses and sugar. A third theory says that toffee’s earlier spelling, “toughy” or “tuffy”, was actually meant to refer to it’s chewy toughness. The term is said to have come from a southern British dialect.
During the 19th Century sugarcane was cultivated and harvested at an impressive and inexpensive rate in Britain’s Caribbean colonies. Back home in England, treacle and sugar thus became very affordable for the masses, who then proceeded to satisfy their sweet teeth by developing candy, the most popular of which was toffee.

Our factory and tasting room is situated at 7A Long Street, Darling.

Our opening hours are:

"I have received my toffee order and have tried all 3 flavours. I must add that I have never put anything so delicious in my mouth ever. They are all creamy and packed with flavour. I am so super impressed that i will no longer buy any other toffee again. My dad is from the UK and says its been years since he has tasted such good hard toffee. He walked off with Tannie Evitas toffee so i have lost a box. Thank you for producing such an awesome product. I will be back for more."

All Darling Sweet products are available on our online shop, evitaseperron.com! Dismiss